Recently a new idea popped up on my news feed and I couldn’t resist trying it, the concept of using your arms as knitting needles is intriguing as it is not something I had seen before, So a friend and myself set out to try it, initially it was hard to work out and it was a little fiddly, but once you get going it was fun and easy, the cast on and the first rows are probably the hardest parts as it’s not traditional knitting. The weave is very loose and it all most looks like a knotty mess, but after five rows it starts to make sense. the scarf took about 30 minutes – an hour to make and sew together to make an infinity scarf, the join looks rather messy as well, but it can easily be hidden whilst wearing.

I used Lincraft – Air yarn to make this scarf – Composition – 78% acrylic, 17% Nylon, 5% Wool. I double stranded this yarn when I was working up the scarf, i used 3/4 of both balls. The yarn I used was much thinner than used in the tutorial, so mine was much looser but I like it simply because it’s not too bulky to wear, it doesn’t get as cold in Australia, no snow 🙁  so it doesn’t need to be as warm

This is one of the most cozy comforting things I have ever worn, I get irritated by yarn easily, after about an hour or so it can get a little itchy, but it’s not to extreme to really annoy me.

The tutorial for the scarf can be found at https://www.youtube.com/watch?v=YPer3Xv2QSM 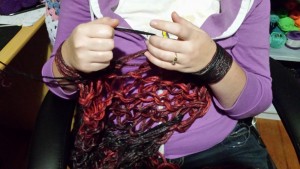 In the process of making the scarf 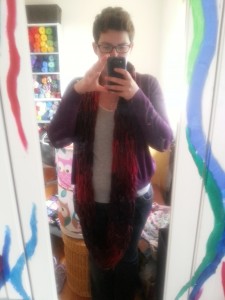 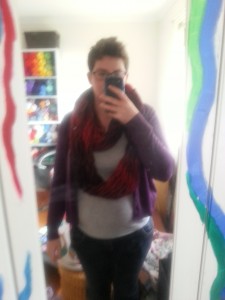 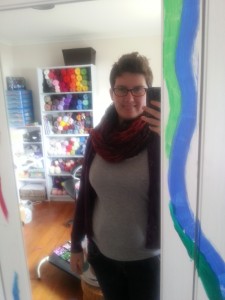